Any male person of good character, and lineal descendant of one who, as a military, naval or marine officer, soldier, sailor, or marine, in actual service, under the authority of any of the thirteen Colonies or States or of the Continental Congress, and remaining always loyal to such authority, or a lineal descendant of one who signed the Declaration of Independence, or of one who, as a member of the Continental Congress, or of the Congress of any of the Colonies or States, or as an official appointed by or under the authority of any such legislative bodies, actually assisted in the establishment of American Independence by services rendered during the War of the Revolution, becoming thereby liable to conviction of treason against the Government of Great Britain, but remaining always loyal to the authority of the Colonies or States, or, who served honorably in a military or naval expedition against the British during the War of the Revolution under the authority of the French or Spanish Governments shall be eligible to membership in the Society. Both Senior and Junior (the latter under the age of eighteen years) memberships are available.

Provided,
That when the claim of eligibility is based on the service of an ancestor in the “minute-men” or “militia”, it must be satisfactorily shown that such an ancestor was actually called into service of the State or United States, and performed garrison or field duty; and

Provided further,
That when the claim of eligibility is based on the service of an ancestor as a “sailor” or “marine”, it must in like manner be shown that such service was other than shore duty and regularly performed in the Continental Navy, or the navy of one of the original thirteen states, or on an armed vessel, other than a merchant ship, which sailed under letters of marque and reprisal, and that such ancestor of the applicant was duly enrolled in the ship’s company, either as an officer, seaman or otherwise than as a passenger; and

Provided further,
That when the claim of eligibility is based on the service of an ancestor as an “official,” such service must have been performed in the civil service of the United States, or one of the thirteen original States, and must have been sufficiently important in character to have rendered the official liable to arrest and imprisonment, the same as a combatant, if captured by the enemy, as well as liable to conviction of treason against the Government of Great Britain.

Service in the ordinary duties of civil office, the performance of which did not particularly and effectively aid the American Cause shall not constitute eligibility.

In the construction of this article, the volunteer Aides-de-Camp of General Officers in Continental Service, who were duly announced as such and who actually served in the field during a campaign, shall be comprehended as having performed qualifying service.

The civil officials and military forces of the State of Vermont, during the War of the Revolution, shall also be comprehended in the same manner as if they had belonged to one of the thirteen original States.

No service of an ancestor shall be deemed as qualifying service for membership in the “Sons of the Revolution” where such ancestor, after assisting in the cause of American Independence, shall have subsequently either adhered to the enemy, or failed to maintain an honorable record throughout the War of the Revolution. No person shall be admitted unless he be eligible under one of the provisions of this article, nor unless he be of good moral character and be judged worthy of becoming a member.

Request for Transfer of Membership PDF

After you complete and save your application, you can UPLOAD the Application File:

(Note: You must be logged in to use this feature)

Click Red [UPLOAD FILE] Button.
Choose the file from your computer that you want to upload.
Click Blue [ADD DOCUMENT] button to send the file.

The Society of Sons of the Revolution has been instituted to perpetuate the memory of the men who, in the military, naval and civil service of the colonies and of the Continental Congress, by their acts or counsel, achieved the Independence of the country, and to the proper celebration of the anniversaries of the birthday of Washington, and of prominent events connected with the War of the Revolution; to collect and secure for preservation the rolls, records and other documents relating to that period, and to inspire the members of the Society with the patriotic spirit of their forefathers,  and to promote the feeling of friendship among them. 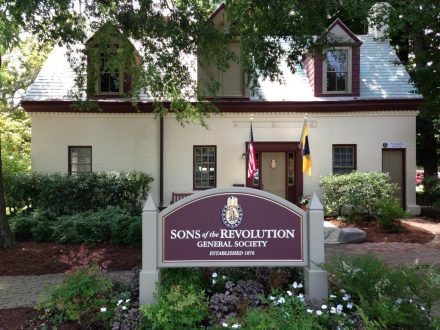 Your ticket for the: Membership Requirements